I will always have great memories of Coach Apple. He was an educator/coach we should all strive to emulate. John was my first coach, and how blessed I was to have him. Let me tell you, he set the bar high for coaches to follow. He played a significant role in my development as an educator. The thing I remember most about Coach Apple is how deeply he cared about us. His knowledge and passion for the sport of swimming was immeasurable. If you had the privilege of being coached by him, you were extremely fortunate. He was truly one of the great ones. I had the pleasure of knowing him for over fifty years. I always used Coach as a sounding board whenever I had questions about anything. He was always there for me, and for that I am extremely grateful. To say he will be missed is an understatement.

In 1962 when I was 5 years old, Coach John provided me the opportunity to join the Woodridge Swim Team. He said if I could swim the length of the pool I was on the team. He entered the water with me and walked beside, shouting words of encouragement as I made my journey to the other side. I remember touching the wall and Coach John lifting me high into the air with his ear-to-ear smile and saying report to practice the next day. For the next 7 years John was the coach who instilled in me a love and passion for the sport of swimming that still exists today. How many people can say after 50 years they had an opportunity to coach alongside their childhood coaching idol. Those moments I will cherish forever. I will continue Coach John’s legacy and instill in the youth of today that same love and passion for the sport of swimming that Coach John instilled in me over 50 years ago. I have that 1962 team picture framed on a wall in my house to inspire me every day to coach with that same vigor and enthusiasm as Coach John would want me to.

John had the ability to inspire his swimmers to reach for the possibilities open to them and the devotion, commitment and expertise to turn those possibilities into realities.

John came to Millersville after doing graduate work at Indiana University where he studied under Olympic coach, Doctor James Counsilman, whose textbook The Science of Swimming was, at the time, considered a sort of bible for our sport. It was the winter of 1966, my junior year. Coach Apple began to teach us terms like tonic neck reflex, ballistic arm recovery and a tremendous wealth of the very latest scientific research on stroke technique. He even had us walking to class on crutches to strengthen our upper bodies. That story found its way into national media coverage in Sports Illustrated. We, in turn learned volumes from him. The proof of the pudding was when the results came. In one season I dropped 25 seconds off my time in the 200 backstroke, and I became one of Millersville’s earliest PSAC swimming champions and a conference record holder. Had I not had the good fortune of having my life intersect with John’s, I doubt I ever would have come to realize my full potential in the pool. I probably would have still been singing in the choir.

I was perhaps one of the first (if not the first) of the young athletes that John coached and mentored over the years.  Standing beside the lifeguard stand at the Woodridge Swim Club, I spent hours talking with him.  I learned about zinc oxide since John required copious amounts on that fair-skinned nose of his, and I also learned how to swim faster through all the time that he invested in me during the summer swim season.   But it was Friday nights at the old YMCA that, together, we explored what his mentor, Indiana University swim coach “Doc” Counsilman, was just creating – the science of swimming.  It was John who opened up my swimming world from Lancaster County to Kelly Pool in Philadelphia and beyond.  Then there were two of us, two Bills (Eiwen and Carvell) who benefited from John’s constant effort to learn more about the sport that he loved and then try it out on us.  Together we honed our stroke mechanics, and when it was time to go home, we frequently had to push his red ’54 Chevy convertible to get it going.  We even served as his two groomsmen at his (first) wedding!

Another favorite memory I had of John was his stories of swimming breaststroke underwater. It was so hard for me to fathom. Underwater?? He said it was too boring for people to watch so they brought it up to the surface by instituting the rule that a swimmer’s head could not go under the water except for the underwater cycle at the start and turns. I have had a master’s coach here in Columbia, SC, who was a collegiate coach and national champion in his day—he is now 84. Although I’ve not been noted as a freestyler, he is always marveling at the excellence of my stroke. I owe that to John. He and I would work for hours on particular aspects of a stroke – hand position, arm position under the body, sculling, finish, high elbow recovery, relaxing during recovery, hand position at entry, extension, and timing. Those things continuously go through my head when I swim, over 50 years after he introduced me to the concepts.

After John had been at Indiana, I happened to be at the open short-course championships in California. Because John had talked to me about the possibility of going to IU after high school , and had talked to me about “Doc” Counsilman, I went up to “Doc” at the meet and introduced myself to him. He remembered that John had told him about me and was very cordial and interested in my progress. In the middle of the conversation, Vince Edwards of “Ben Casey” fame walked up to Doc – they were friends from way back as Edwards was a sprinter who swam for Michigan. Doc greeted him and introduced him to some of his boys. He then introduced Edwards to Brian Job (current world record holder in the 100m breaststroke), Don MacKenzie (200m breaststroke gold medalist at the 1968 Olympics), and then to little old me, a bare qualifier for the open championships. What a high!

As for his underwater filming, I still have movies of me as an 8 or 10 year old that John filmed from a lifeguard stand or the 3 meter board. I also remember another time at Golden Meadows during the summer (I use that term loosely) when the water was barely 64 degrees. John had his wet suit on, and we had to swim in breathtakingly cold water. Mike Orstein’s lips were blue and his body was shaking so violently (he was a real skinny kid) that we thought he’d never go back in the water again.

When I was a kid (probably 8 years old), John was able to offer us the use of Brooks Hall pool on Saturdays in the winter time.  It was a very snowy day, and John lived about a mile out of Millersville.  He walked into town to open the pool for us to swim.  That next year we either won the county championships or finished in second place.  This was the best we have ever done as a summer league team.

How could anyone forget his ability to whistle.  You could always tell when he was starting swimmers in the sprint lane before a meet.   After a lot of years away from swimming, I was at a meet one day and heard the whistle again, and knew immediately that John was at the pool.

Without a doubt, John Apple was a huge influence in my young life.  His “pied piper” personality definitely led me into higher level of swimming.  This was a start in a good direction which has led to meeting many good friends and opportunities in my life.

I swam at Millersville under coach Apple in the mid 60’s. I had no, repeat no, aquatic experience prior to walking on to that team. I always said that the most athletic thing I did in high school was to sing in the choir. Coach and that team changed me forever. By my junior year I was the top breaststroke swimmer in the conference. Since graduating I have been involved in master’s swimming as well as being a swimming parent, an official, and a coach. John Apple changed the direction of my life.

It was 1966 when I first met John Apple. I had heard about him and some of his training theories, one of which was having his swimmers walk to classes on crutches to strengthen their arms. That season when Lock Haven swam Millersville at Millersville, I watched Ted Fitzgerald lead off Millersville’s medley relay with an awesome split. It was the first time I was really psyched out! After graduation, I found myself at East Petersburg Swim Club coaching a summer league team. John Apple had many friends at East Petersburg, and I got to know him and had many coaching conversations with him. As a new coach right out of college, I wanted to learn as much as I could. John was very helpful with every question. I just wish I knew how he got the water at the old pool at Millersville College so cold?! That was one coaching question that I never got the answer for.

I was John’s roommate in Teter Quadrangle at Indiana University, Bloomington Campus, and he was a fantastic person and friend. I finished my Ph.D. in medical physiology and taught for another 29 years across the US, and I was lucky to have kept in touch with John during this time to find out what he was also doing in the aquatic arena. I’m so sorry that he’s gone, but also so happy for his many contributions. RIP, Dear Friend. 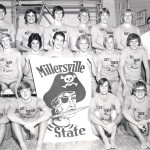 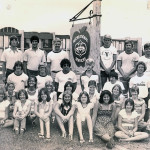